Roswell High School Names Valedictorian, Salutatorian for the Class of 2021

“I am so proud of Noah and Eric,” said Principal Robert Shaw, Ed.D. “They have continued to excel in academics and in other areas, even during difficult times. They are smart, adaptable and resilient, and impressive representatives of the Class of 2021.”

Frank is the son of Gail and Stephan Frank of Roswell, and the brother of Liam Frank, a Roswell High School graduate of the Class of 2018. Prior to attending Roswell High School, Frank attended Sweet Apple Elementary, Fulton Sunshine Academy and Elkins Pointe Middle School. He has also been dual enrolled at Georgia Tech, where he completed computer science and math courses.

Frank has been a virtual learning student since March 2020.

“I can connect with my friend virtually and I’m comfortable to do school virtually,” he explained. “But I am looking forward to being in college in person.”

Frank began playing the viola in sixth grade. During his four years at Roswell High School, he performed with the Roswell High School Orchestra, Chamber Orchestra and All-State Orchestra. Before the pandemic, Frank tutored Elkins Pointe Middle School students in math, was on the math team and in Chemistry Club and Mu Alpha Theta, the honor society for math students.

His favorite courses have been physics and calculus with Beau Chilton and Daniel Brown, respectively.

“I like physics and math, and mechanical engineering is what I want to do,” said Frank.

He plans to attend Georgia Tech in the fall.

Salutatorian Zhang is the son of Yingshuang Ding and Janrong Zhang of Roswell. Prior to attending Roswell High School, he attended Sweet Apple Elementary, Alpharetta Elementary and Elkins Pointe Middle School. He has also been dual enrolled at Georgia Tech, where he has taken math courses. 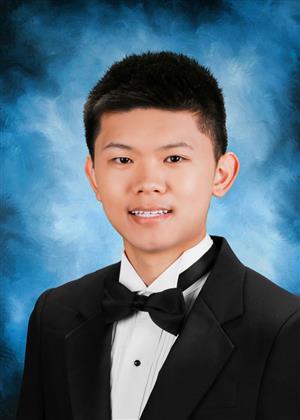 Zhang’s favorite subjects in high school have all been math-related.

“I like finding equations and applying that,” he explained. “One of my favorite teachers is Mr. Brown …. He provided a good foundation for me when I entered Georgia Tech math.”

In addition, Zhang said, “My junior year I started a table tennis club on Tuesday mornings.”

Outside of school, Zhang has been playing piano since he was four years old. A first-generation American, he has attended Chinese school on the weekends, and speaks Chinese at home with his family.