It's Ok not to feel Ok. It's Ok to have bad days. It's Ok to ask how someone is feeling. It's Ok to ask for help. This time of year can be tough for our kids. The holidays, grief, family challenges, end of the semester grades, college acceptances, final exams, etc. all bring extra stress and pressure. This year CPSW decided to add a "December boost" campaign. Schools have received stickers, cards, posters, T-shirts, lists of ideas, and lesson plans to roll out this campaign. We know that adults will benefit from this campaign as well. Spread the word throughout December using the hashtag #OKFCS!

Nishitha Putrevu, a 6th grader at Webb Bridge Middle School, won a top honor at the 2020 Fulton County Art Calendar awards. Her design, "Save water, Water is life," was selected as the cover art for the calendar. Additionally, Nishitha was honored by the Fulton County Board of Commissioners with a special proclamation. Fulton County Schools (FCS) was well represented in the calendar. Nishitha's design was one of 22 selected out of more than 200 designs submitted. Of those selected, 14 were FCS students. Nehasri Kathiravan, Abbots Hill Elementary; Anvitha Suram, Cambridge High; Niayelle Layne and Evelin Hernandez, Campbell Elementary; Kavisha Gupta and Jesme Varughese, Creek View Elementary; William Chanco and Daniela Jimenez, Northwood Elementary; Barrett Rixey and Maison Rixey, Vickery Mill Elementary; Abby Allen, Dylan Cortizo, Harshita Prasad, and Aimy Varughese, Webb Bridge Middle, all had their art work selected for the calendar. Ashley Miller, Webb Bridge Middle Art Teacher, was saluted for having the cover winner participate in the contest. All art teachers were thanked for promoting the message of water conservation and encouraging the creativity of their students by having them participate in the contest. Rebecca Williams, Webb Bridge Middle Principal, said "I am so proud of Nishitha and the four other WBMS students who are featured in the Fulton County Art Calendar! Their artistic expressions to save our planet's water are both impressive and powerful." Campbell Elementary Principal Leah McDaniel said, "It is a proud moment as a principal to have environmentally conscious students, who are able to apply academic knowledge paired with artistic ability, to change the world around them."

Riverwood International Charter School celebrates senior Hanna McDaniel for scoring a perfect 36 on the ACT (American College Testing) exam in one take. Hanna is a candidate for the International Baccalaureate (IB) Diploma. Her IB studies include Higher Level Math, Environmental Science, Literature and Theory of Knowledge. McDaniel is a member of the Beta Club, the National Honor Society, Future Business Leaders of America, and the Animal Rights Club. She enjoys tutoring students both at Riverwood and outside of school. McDaniel plans to major in Meteorology with a minor in Mathematics and has her sights set on Georgia Institute of Technology, University of Miami, or Florida State University. McDaniel commented that taking numerous practice tests helped her prepare for the ACT. Out of the 1.8 million students who take the test every year, only about 1,000 achieve the highest possible ACT score.

Tri-Cities High School's Boys Basketball Team, coaches, and families participated in the "Rumble on the Ridge" in Arkansas during the Thanksgiving holidays. The first game played Thanksgiving Day resulted in an 84-73 win over Bartlett High School followed by a 90-89 win over North Little Rock High School. Congratulations to the Tri-Cities Basketball team! 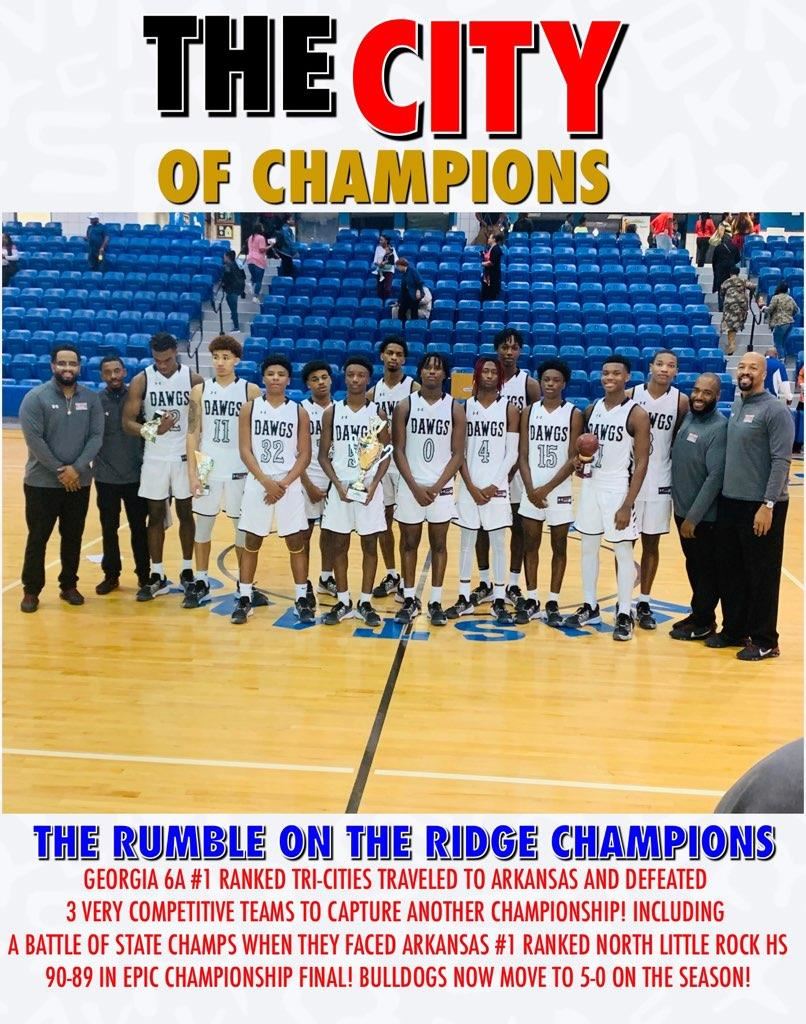 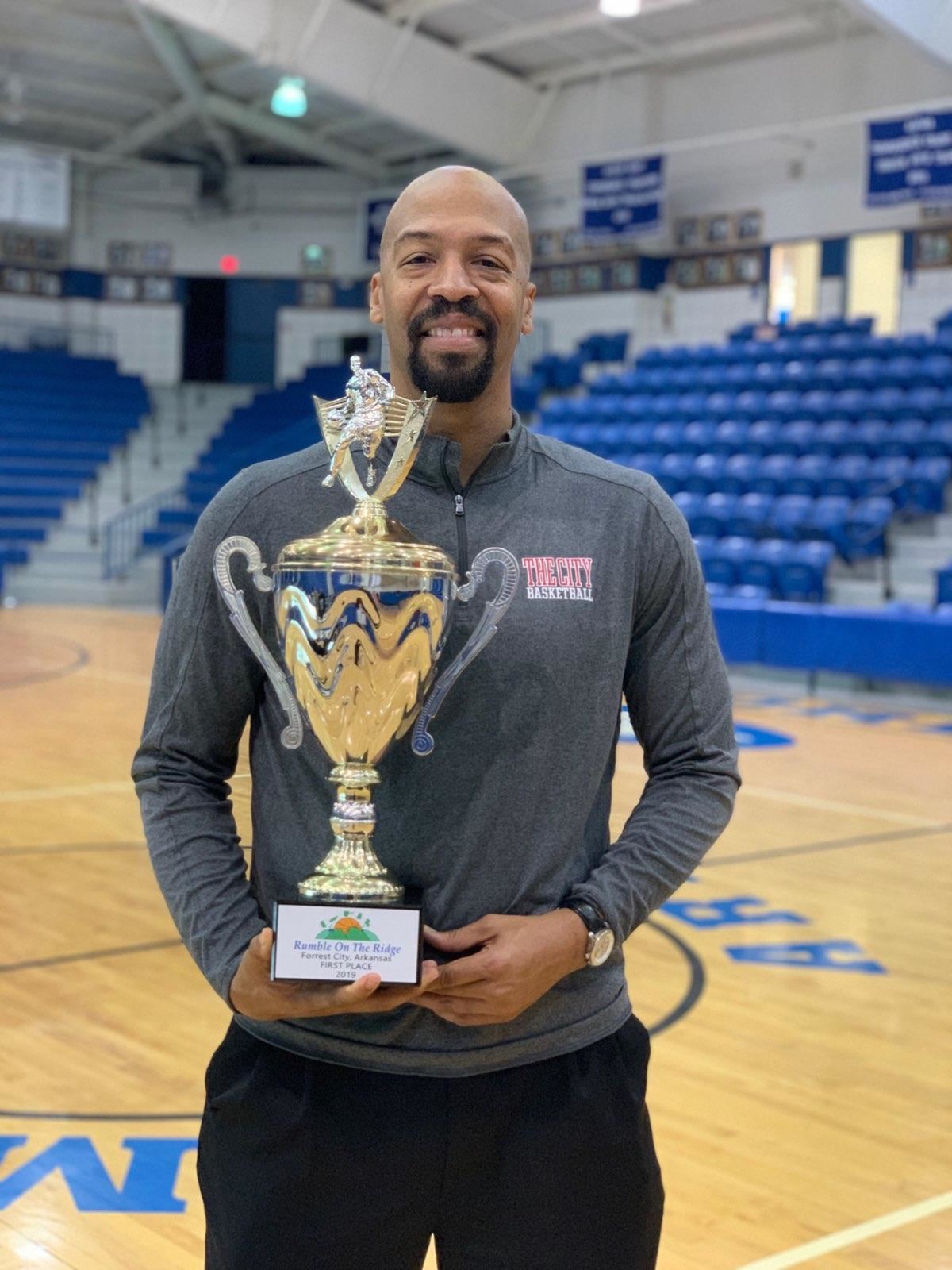 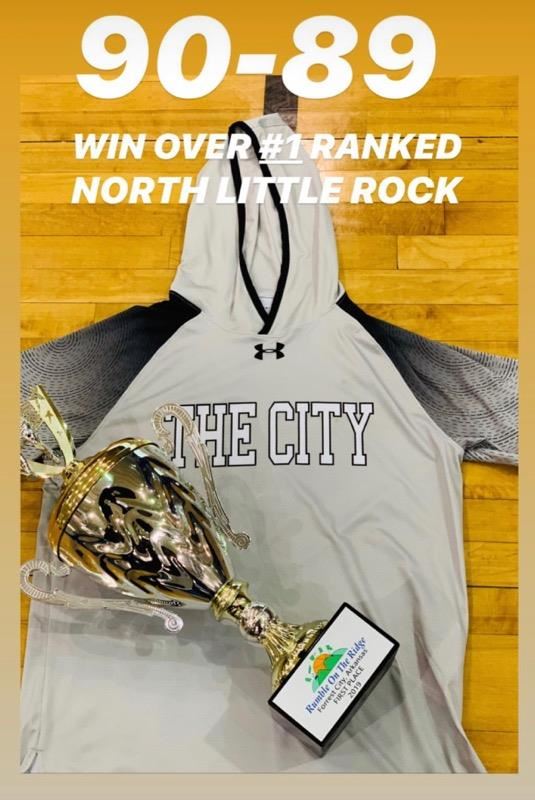 Tri-Cities High School's Marching Band joined Langston Hughes High School's Band and Liberty Point Elementary's Dance Team at the 46th Bayou Classic. The classic is an annual football game that features the pageantry of Historically Black Colleges and Universities. The students enjoyed the Greek Step Show and the Battle of the Bands and marched in the parade!

Woodland Middle School dedicated its new Embassy Community Hub recently. Fulton County Schools (FCS) Board Member Kimberly Dove, community partners, and outgoing principal Dr. Jason Stamper thanked supporters. "We're helping out parents with money management, laundry support, and tutorial," said Community Hub Coordinator/Parent Liaison Keterial Franks-Smith. "We're also providing social-emotional support." The Embassy Community Hub serves families of Woodland MS and functions in two places. Community-based activities take place at Regency Apartments, while school-based activities take place at the Woodland MS Community Hub. When Dr. Jason Stamper joined Woodland as Principal in 2014, he collaborated with stakeholders to develop partnerships that have helped increase the school's Career Readiness Performance Index (CCRPI) score from 52.4 to 74.6. Additionally, Woodland's school climate score has increased from one to four stars, an amazing accomplishment.Woodland's 21-point increase on their CCRPI is the result of a staff focus on literacy. "On the educational side of the Embassy Hub is our literacy lab, where students have realized unprecedented academic growth and achievement through literacy intervention," said Stamper. "The literacy lab, which is officially named the Infinite Literacy Campaign (ILC), takes place the first hour of each day. During this time, every staff member in the building, no matter their content, supports literacy instruction." 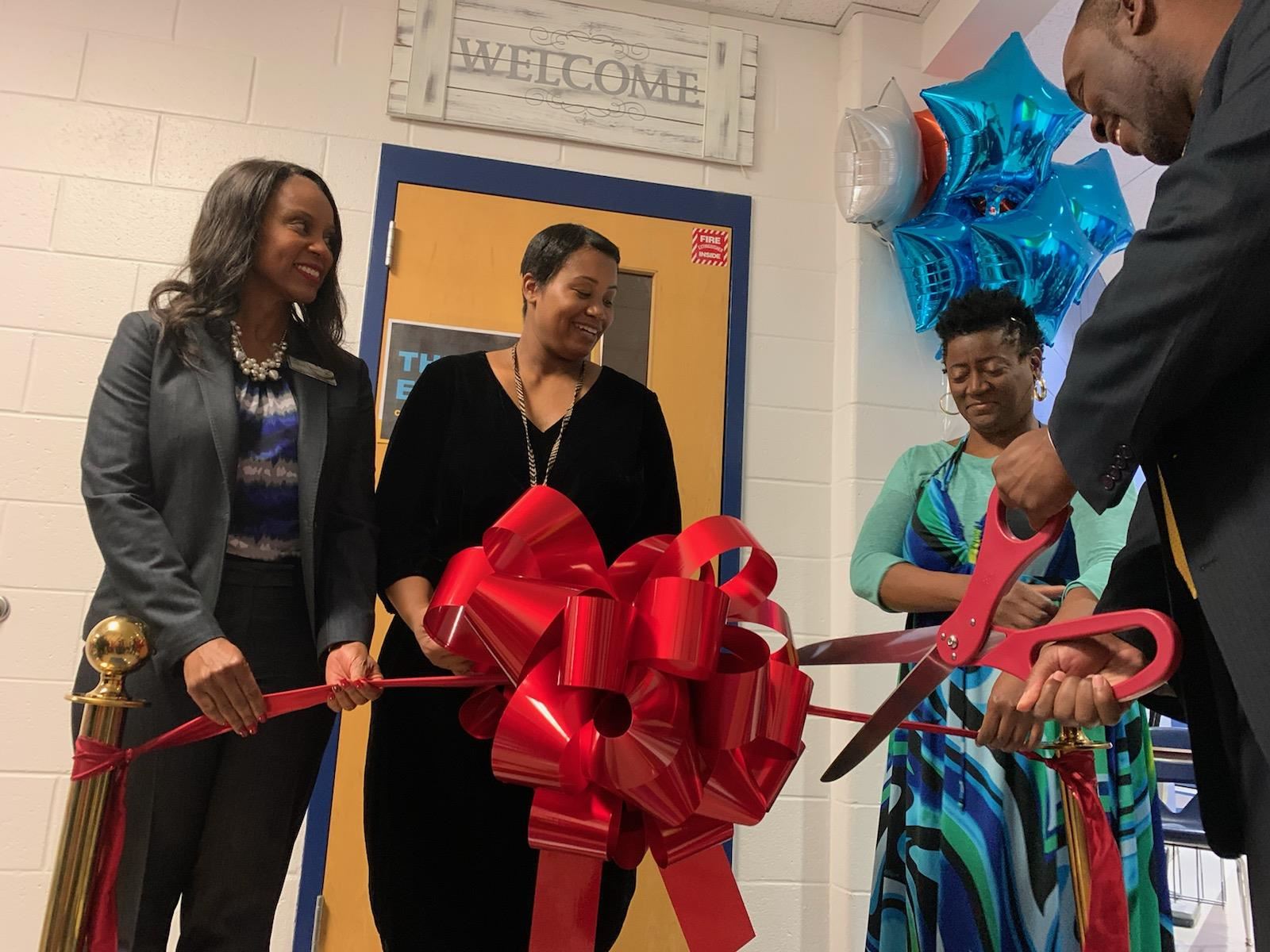 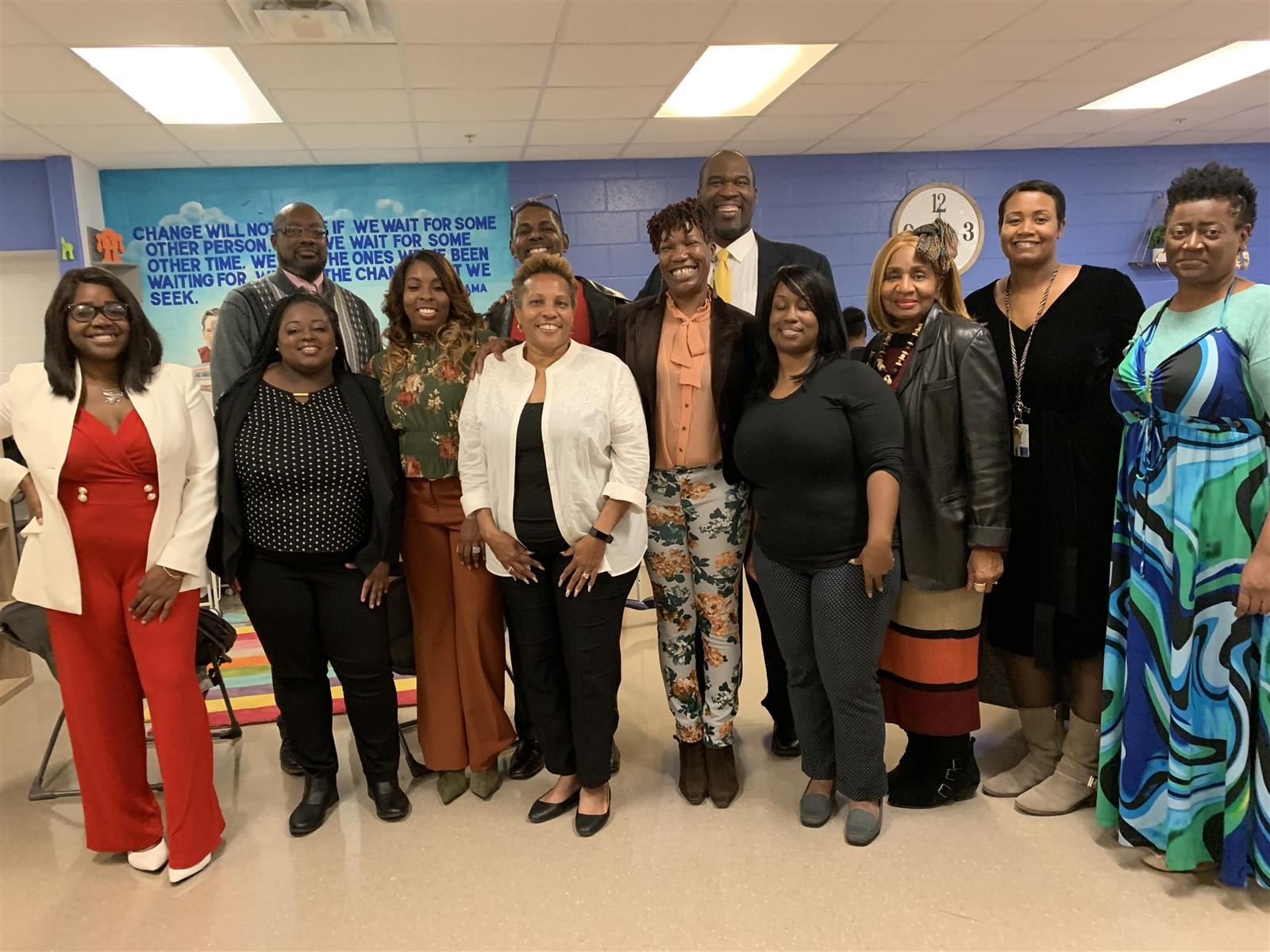 The Autrey Mill Middle School (AMMS) student clubs have been working overtime to service community needs during the holidays. Student Council hosted a canned food drive in November and collected more than 1,800 items and donated them to a local area food bank. The AMMS Interact Club hosted the annual Toy Drive and collected over 75 toys to donate to local area shelters. Lastly, the AMMS Will 2 Live Club hosted their Coat and Jacket Drive and collected 75 jackets and coats to be donated to local area shelters. Five students from Chattahoochee High School were named State PTA Reflections Qualifiers: Sneha Tallam in photography, Jyotsna Rao in music, and Kate Kwon, Hannah Poon, and Jenna Matthews for visual arts.Reflections is a multifaceted, annual arts competition for all grade levels that allows students to creatively interpret the year's theme. For 2019, the featured theme was "Look Within". Art submissions could be made in six categories: visual arts, literature, photography, film, music composition or dance choreography. Students submitted entries to their schools, and each school's Reflections committee reviewed the entries and voted using a score card for interpretation, creativity and technique. Schools sent entries to the North Fulton Council PTA at the Teaching Museum in October, and the North Fulton Council judges selected those that will move on to the state competition.Each of the Chattahoochee students who are advancing to the state level have previously entered the Reflections competition in elementary, middle or high school, and most are currently enrolled in art or music classes at Chattahoochee with hopes of continuing their interests at the collegiate level.

Last year, a Northview High School (NHS) Class of 2019 graduate, Halime Benzer, led her student council in a project to promote literacy in Africa by organizing a book drive during her senior year; and recently, she learned the positive results of her efforts. Halime researched book drive projects and found the website of the African Library Project, an organization that enables book drive organizers to start libraries in schools and communities in different parts of Africa. She came across an opportunity to start a library at Nswaswa Primary School in Malawi, located in the southeastern part of the continent. Halime believed that children everywhere, despite lack of access and advantages, deserve the right to a great education. Her goal was to not only increase literacy but to help these students realize their dreams and aspirations.After she registered and was assigned to the school, she received her task to collect 1,000 books for preschool through middle school level, that would be enough to start one library. Halime reached out to her NHS AP Literature teacher and Student Council advisor Brian Rawlin, for his and the council's support. Over four months, they collected nearly 1,500 books from individuals in Georgia. The group also had to raise money to cover the ample shipping costs which amounted to $600. The boxes of books were kept in a storage room as they collected and sorted through all the donations. After she graduated in May, the books were then sent overseas to the students at the Malawi school which, she was informed, arrived in October. "This project symbolizes the power of collaboration and how it is our duty to help others have the opportunities that we have," said Halime. "My family immigrated to the U.S. from Turkey so that my sister and I could have a better education. This project symbolizes the importance of education in one's life, and if sending books to Africa could help increase literacy, then I believe that the books we sent will have a positive impact."

Riverwood International Charter School launched a morning show late last month after building a new, state-of-the-art television studio in its new building. Students in all three levels of the AV Tech and Film pathway will make at least two episodes per week as well as host clubs, events, sports, and the announcements. Riverwood is committed to practical, in-depth training in the studio as Georgia continues to grow as a film and television hub in the United States.

Flu Season Update - Georgia is experiencing the onset of an early flu season with confirmed cases already reported by local health providers. The Centers for Disease Control (CDC) and the American Academy of Pediatrics have stressed the importance of children receiving flu vaccines and the dangers of the flu to children. According to the CDC, a flu vaccine offers the best defense against getting flu and spreading it to others. The American Academy of Pediatrics (AAP) states that the flu can cause 10 days of fever and lead to serious complications even for healthy kids. Therefore, we are sharing this information to remind us to take precautions and to work together to help prevent the spread of flu. To ensure the safety and health of students, staff and parents, we encourage you to take proactive measures that can help reduce the spread of the flu and other communicable illnesses.

Text4Help, a program for teens in crisis to anonymously find resources and support, will be expanded to Fulton County Schools middle schools. Launched in 2018 in collaboration with Fulton County Government, the program is an anonymous crisis text line aimed at providing a valuable resource for students seeking support or an outlet to share concerns. The program allows teens facing stress or in crisis to reach a licensed clinician who will respond within three minutes, 24 hours a day, seven days a week. The program was initially launched in FCS high schools now, one year after its launch, the program will be expanded to students in middle schools. Fulton County Government and FCS were the first in the Southeast to launch the Text4Help program.