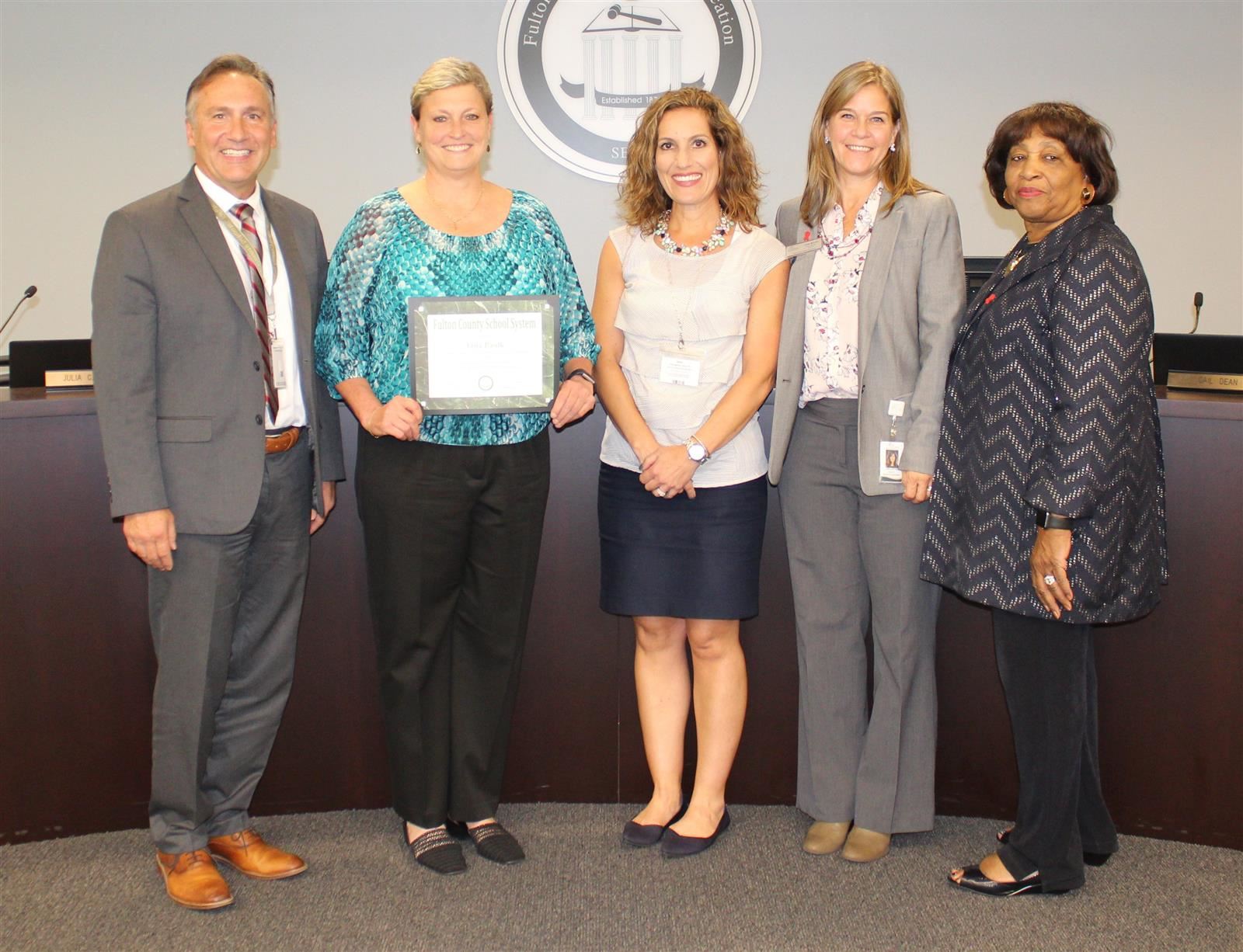 2019 GAHPERD Elementary Teacher of the Year

Jana Paul, P.E. teacher from Findley Oaks Elementary School, was named the 2019 Georgia Elementary Teacher of the Year by the Georgia Association for Health, Physical Education, Recreation and Dance. She was presented with this award at the state conference in Athens. Jana is a 20-year teaching veteran in her fifth year at Findley Oaks. She also is a leader in her school as well as Findley Oak’s ambassador for the district-wide Wellness Committee. Her goal is to ensure that all students possess fundamental P.E. skills to feel confident in their physical abilities and choose to be active in and out of school. 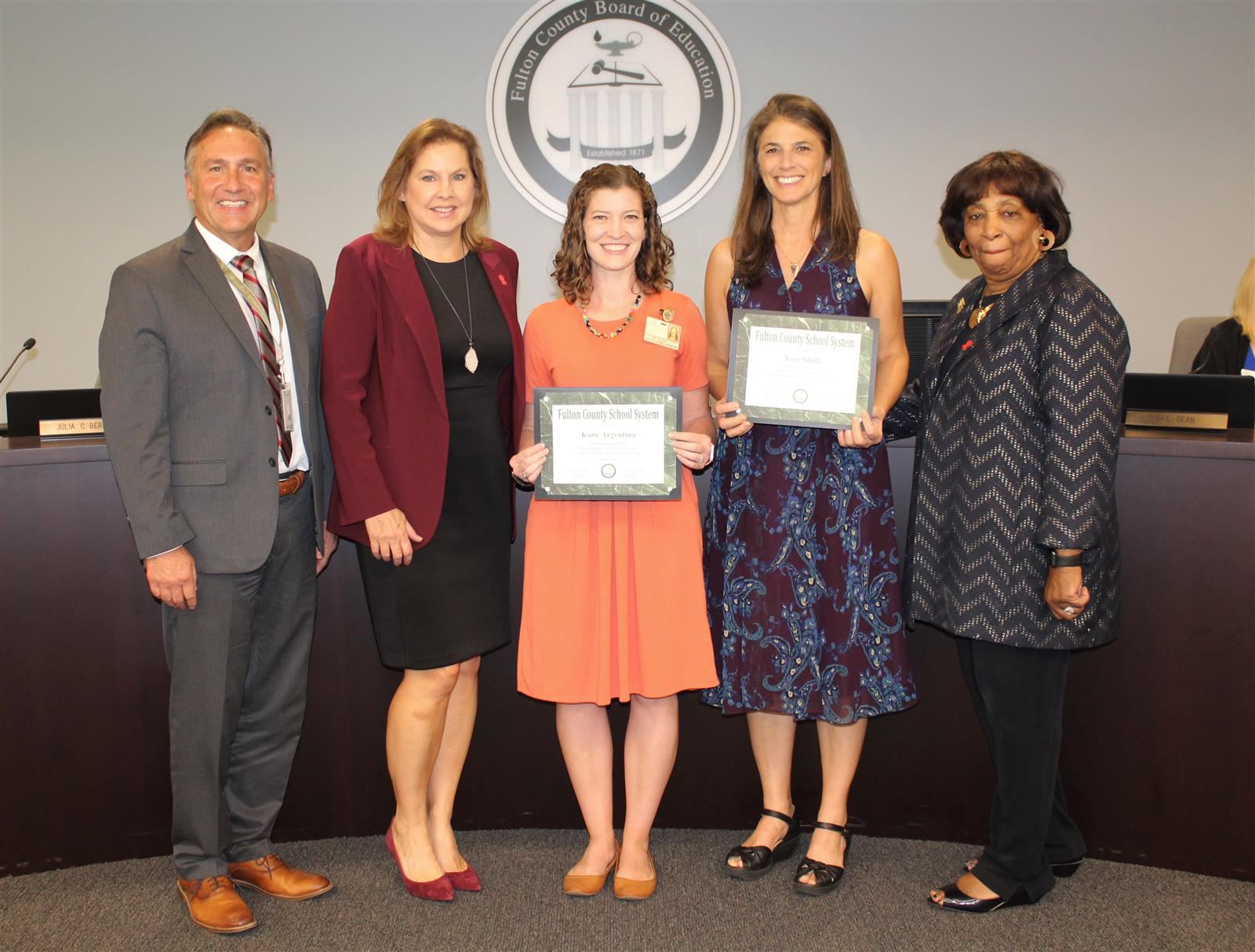 Katie is a dedicated art educator who has taught in FCS for 17 years and at Sweet Apple for three years. She has coordinated school-wide art shows as well as a Youth Art Month show for the Northwest Learning Community. The artwork of some of her students has been displayed at Hartsfield-Jackson International Airport as well as at the Georgia State Capitol.

Jena has been the Museum Curator for 10 years where she manages arts-integrated programming and the historical archives for Fulton’s two museums that serve 50,000 students. Under her leadership, the program has been awarded support from the Library of Congress Teaching with Primary Resources, the Kennedy Center and the Georgia Council for the Arts, among others. Students who visit the museums enjoy creative, experiential learning with professional actors portraying historical figures, and through escape rooms and walking tours. The museum also offers primary source documents for students and teachers to review. 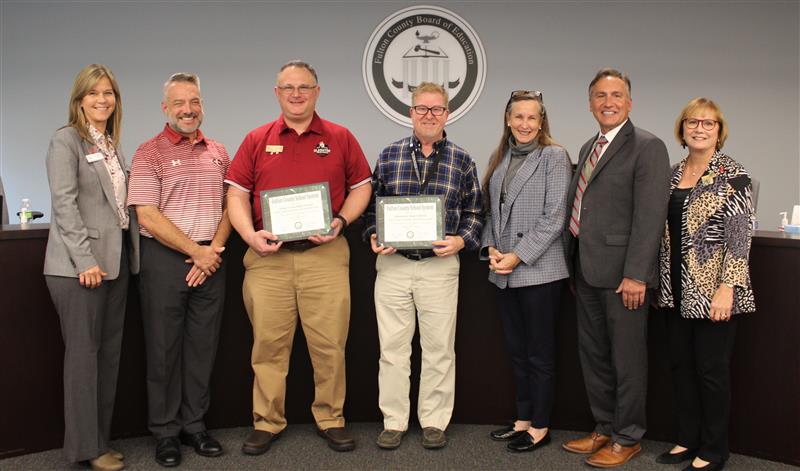 The Audio, Video, Film and Technology (AVFT) departments of Johns Creek High School and Alpharetta High School have been given the Craft Achievement Award by the Student Television Network. This honor is given to schools for the exceptional use of their websites to help promote film and video. Their sites give students relevant industry information, host their morning shows, and provide information on lessons, due dates and a receptacle for submitting their work. Representing these schools are AVFT teachers Jamie Chuven (Johns Creek) and Tracy Misner (AHS), both of whom have long resumes of success in their industry, both in education and in the private sector. Their thriving, award-winning programs foster exceptional creativity and skill in videography, writing, editing, lighting, sound and graphics.

Jamie has been in north Fulton schools for nearly 22 years and at Johns Creek since it opened in 2009. Currently Johns Creek’s Teacher of the Year, he is on the Student Production Awards Committee for the Southeast Emmys, and he and his students have produced the Emmys ceremony video for the past four years. His students have won awards and placed at conventions on the national level.

Tracy has been with Alpharetta since 2009 and with FCS since 2013 and is also a consultant and podcaster. His website has been used by professional organizations including the Georgia Department of Education as a model for websites and new video production teachers. He has won a host of student production awards in the southeast region and runs the largest student film and video program in Fulton County. 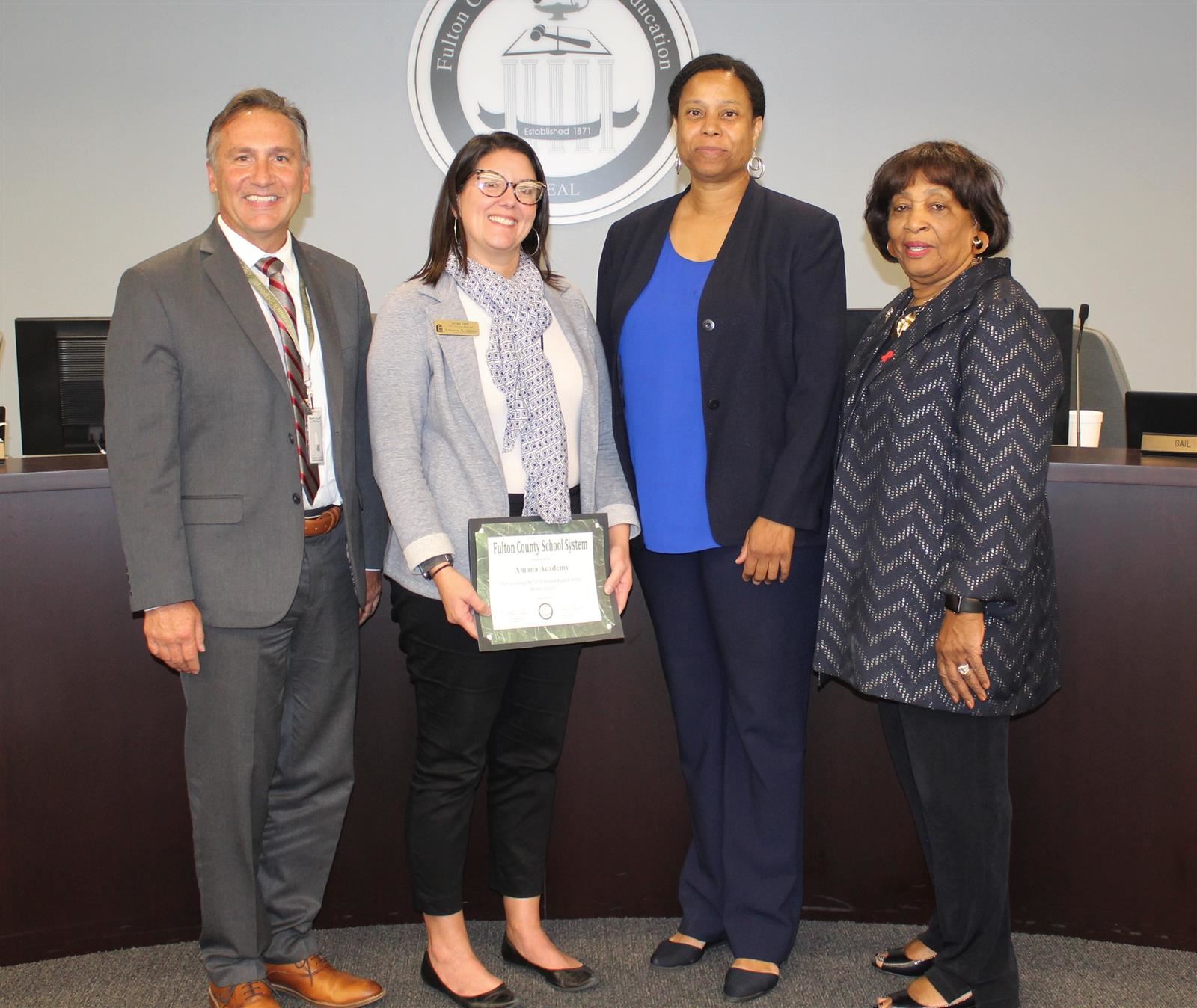 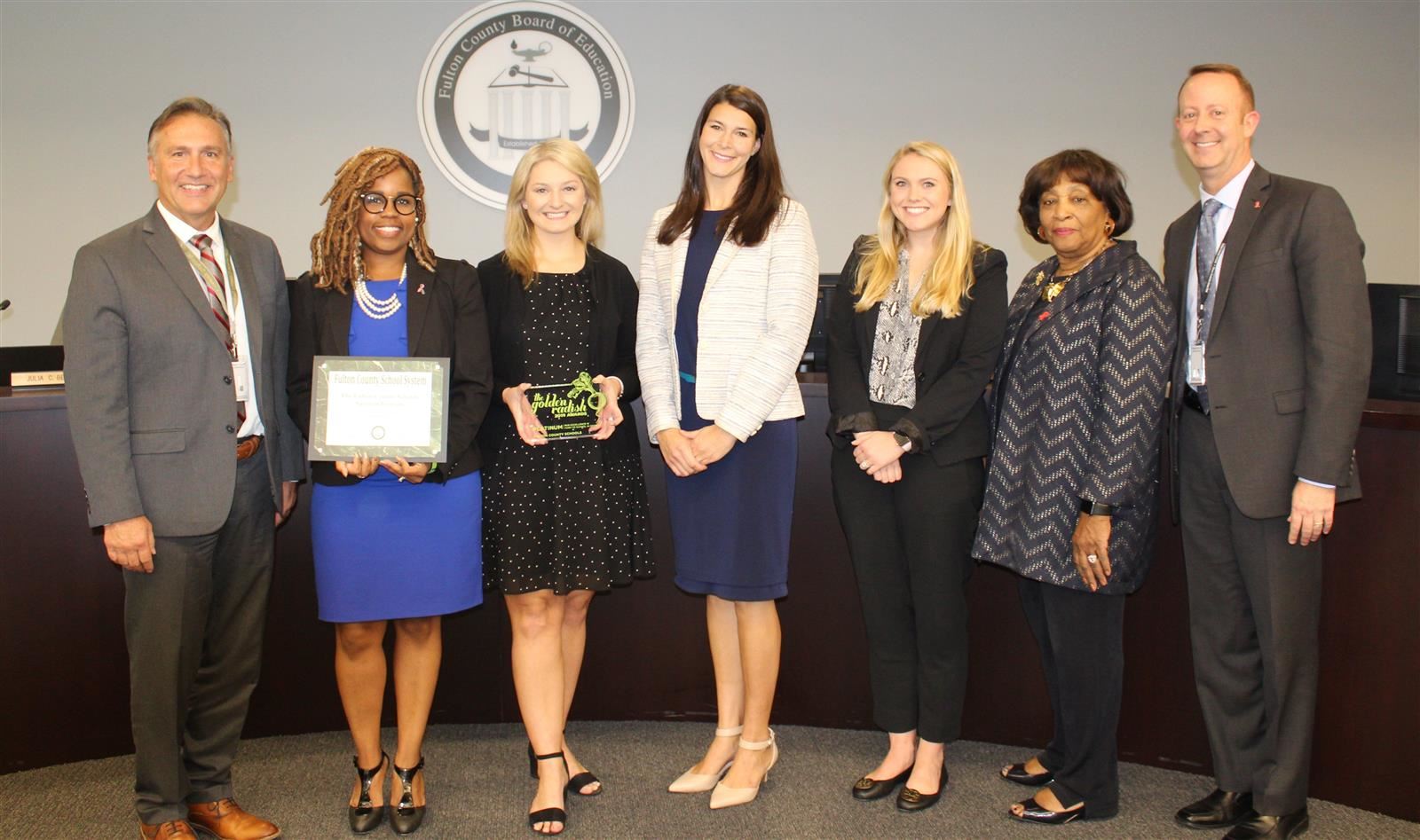 In September, Fulton County Schools’ Nutrition Department and FCS charter school Amana Academy were honored with Golden Radish awards by Georgia Organics. The Emmy’s of school nutrition, the Golden Radish awards were presented to over 150 Georgia school districts at the Mercedes-Benz Stadium. This designation represents the highest level of commitment to best practices in providing fresh, locally grown foods to students and recognizes all aspects of farm-to-school: from local food procurement to hosting taste tests and gardening with students. The award is sponsored by Georgia Organics and its partners, Georgia's Departments of Agriculture, Education and Public Health as well as the University of Georgia Cooperative Extension.

Fulton's Nutrition Department was recognized at the Platinum level – the highest honor - for its accomplishments during the 2018-2019 school year. Approximately six million meals that included locally-grown food were served to over 90,000 FCS students. A three-member Special Diets Team works to efficiently respond to the large volume of special diet requests. This is the eighth consecutive year the School Nutrition Department has won this award. 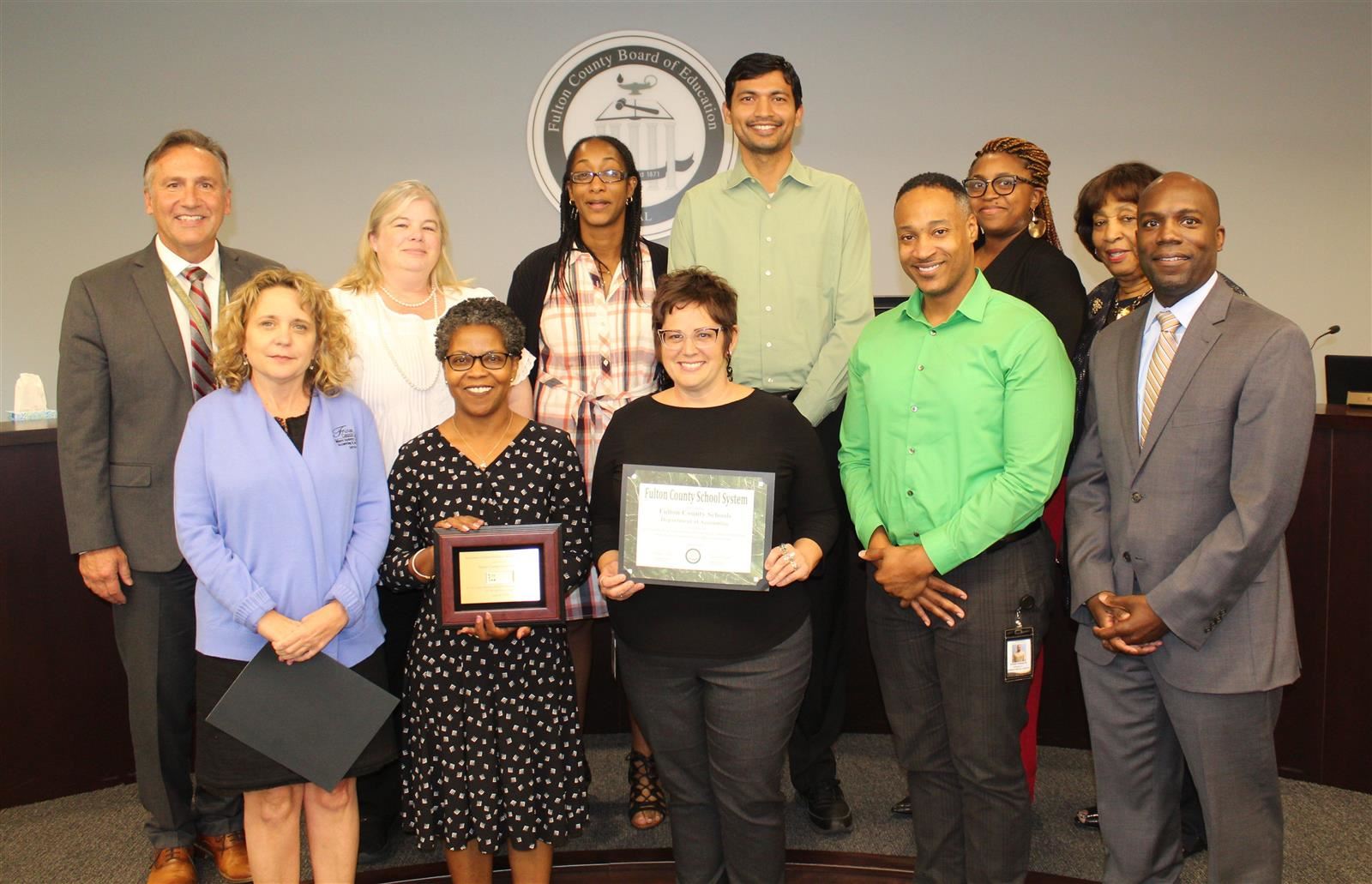 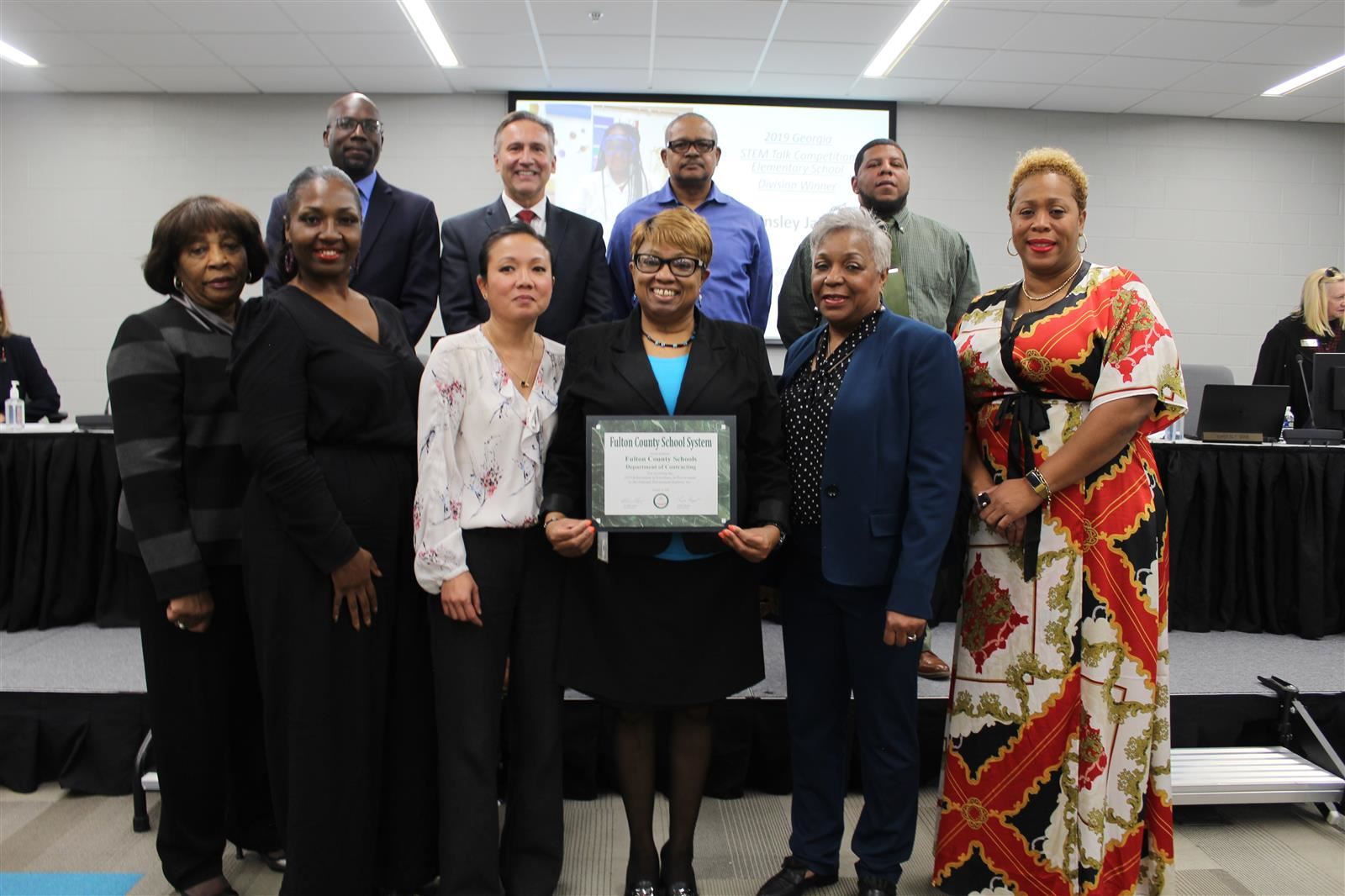 Fulton's Department of Financial Services has won three national and international awards this year, two for the Comprehensive Annual Financial Report representing Fiscal Year 2018. The Accounting Department was acknowledged with the Certificate of Excellence in Financial Reporting Award by the Association of School Business Officials, International (ASBO) and the Certificate of Achievement for Excellence in Financial Reporting Award by the Government Finance Officers Association of the U.S. and Canada (GFOA). These awards represent the commitment of the School Board and its staff at meeting the highest principles of governmental financial reporting. The document was prepared by the Accounting and Retirement Services staff led by Executive Director Greta Tinaglia. To receive this award, Fulton County Schools had to satisfy the nationally recognized standards of school system financial reporting and validate the credibility and transparency of their systems’ operations measured by the integrity and technical competence of its business staff.

The Contracting Department, under the direction of Executive Director of Contracting Services, Angela Young, was honored with the 2019 Achievement of Excellence in Procurement Award by the National Procurement Institute, Inc.  FCS is one of only 12 agencies in Georgia and one of only 23 school districts in the U.S. and Canada to receive this award. This designation is earned by organizations that demonstrate excellence by obtaining a high score on a rating of standardized criteria. This team had to satisfy the ever-evolving AEP criteria designed to measure and provide benchmarks for public procurement best practices including innovation, e-procurement, productivity and leadership attributes of the procurement function. This is the ninth consecutive year FCS has received this award. 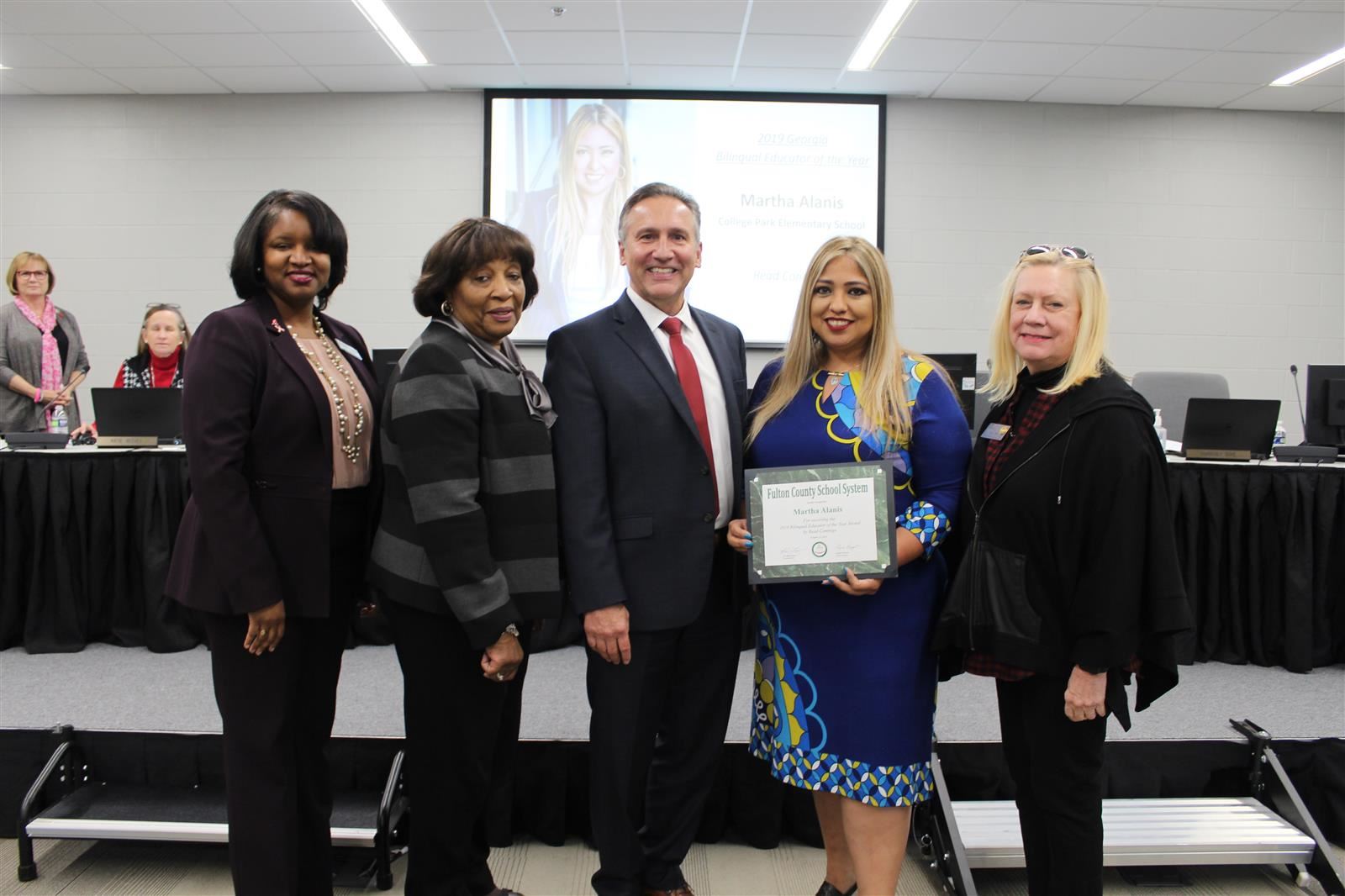 Martha Alanis, Early Intervention Program (EIP) Specialist at College Park Elementary, was named Georgia Bilingual Educator of the Year Award with Read In Spanish, “Conmigo” means “with me”. Read Conmigo is an organization that provides free bilingual children’s books to promote bilingual literacy in families. Ms. Alanis not only provides additional instruction for students in need of extra support in reading and math, but she does it in two languages! She is recognized for going the extra mile, promoting children's literacy and inspiring a love of reading in her students. She has been teaching for 17 years and is in her first year as an EIP Specialist at College Park. She says, “teaching students to read is priceless!” 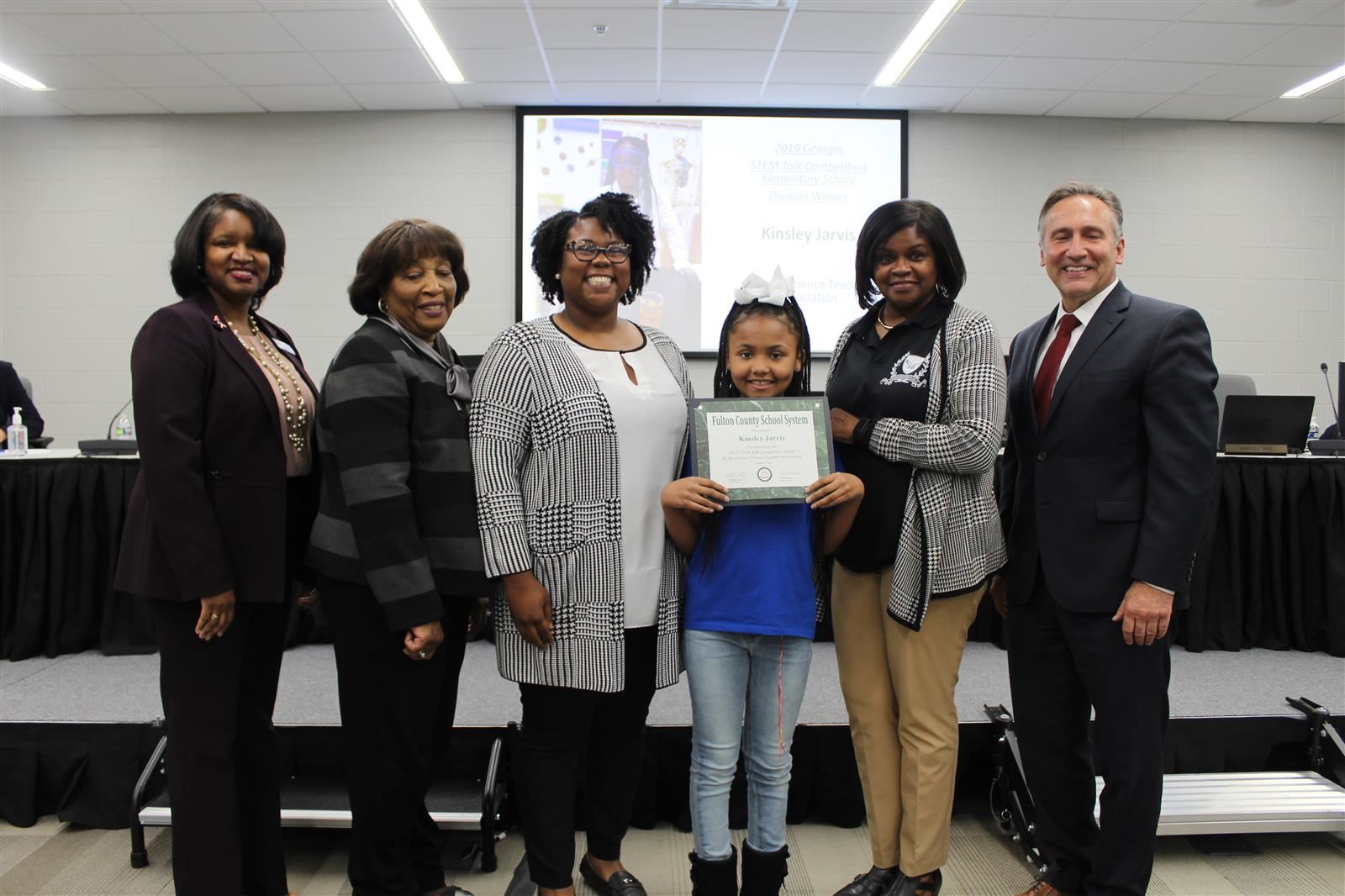 The final award went to a fourth grade student at Palmetto Elementary School who won the Georgia STEM Talk Competition, sponsored by the Georgia Science Teachers Association. Competitors were challenged with the question of how to make positive, innovative change for the future with their STEM Learning. STEM stands for Science, Technology, Engineering and Mathematics. They had to give an example of one of their ideas and how to make it happen. This student used an aspect of her fourth grade science unit on Water and Weather that especially interested her: access to clean water. She won for her creative design ideas and video presentation. Kinsley researched water filtration systems and prepared her speech with help from her Palmetto Elementary science teacher Kianna Pinckney, who happens to be Fulton’s 2018 Teacher of the Year. Kinsley won a prize of $100 and the honor of speaking at the 2019 STEM forum. She is currently working on a prototype for her water filtration system.