Chief Financial Officer Marvin Dereef presents a penny-framed "paid in full" document to each school board member in commemoration of the district paying off its final general obligation bond through SPLOST.

At its January 12 work session, the Fulton County School System celebrated a major milestone in its financial history.

"As of January 1, Fulton County Schools has paid off a $135.2 million bond secured in 1998. This is our final outstanding general obligation bond backed by the FCS property tax digest," said Chief Financial Officer Marvin Dereef.

Dereef then presented each School Board member with a framed copy of the "Paid in Full" notice, each adorned with shiny pennies.

"We thank Fulton County voters for supporting our SPLOST [Special Purpose Local Option Sales Tax] program over the years," said School Board President Julia Bernath. "In each five-year SPLOST, funds were earmarked to pay off debt so that Fulton County property owners do not face an additional burden through their school taxes. Our millage rate has been the lowest in Metro Atlanta for 11 consecutive years, largely because we have not needed to raise millage to pay off bond debt."

"Every time someone spends money in Fulton County – whether by shopping, buying gas, or eating at a restaurant, for example – one penny of every dollar goes toward the future of our students," said Dereef. "Those pennies add up, and today they represent millions of dollars."

In the 1990s, when the bond was authorized, Georgia school boards had limited options to fund a long-range plan for building new schools or providing for other needed improvements. A board could raise the millage rate; it could reduce expenditures, or it could ask voters to approve a special bond referendum as a long-term loan.

That changed in 1996 when the Georgia Legislature broadened the SPLOST law to allow school systems to collect for capital outlay projects, and the following year Fulton County Schools successfully asked voters to approve its first five-year SPLOST. Since that time, SPLOST has become the district's primary funding source for new school construction, additions and renovations, technology innovations, transportation upgrades, and safety improvements.

"The 'pay-as-you-go' nature of SPLOST has proven beneficial to taxpayers since bonds are long-term loans that must be repaid with interest," said Bernath. "We thank our community for approving SPLOST so there is a way to pay off debt with limited impact on our taxpayers." 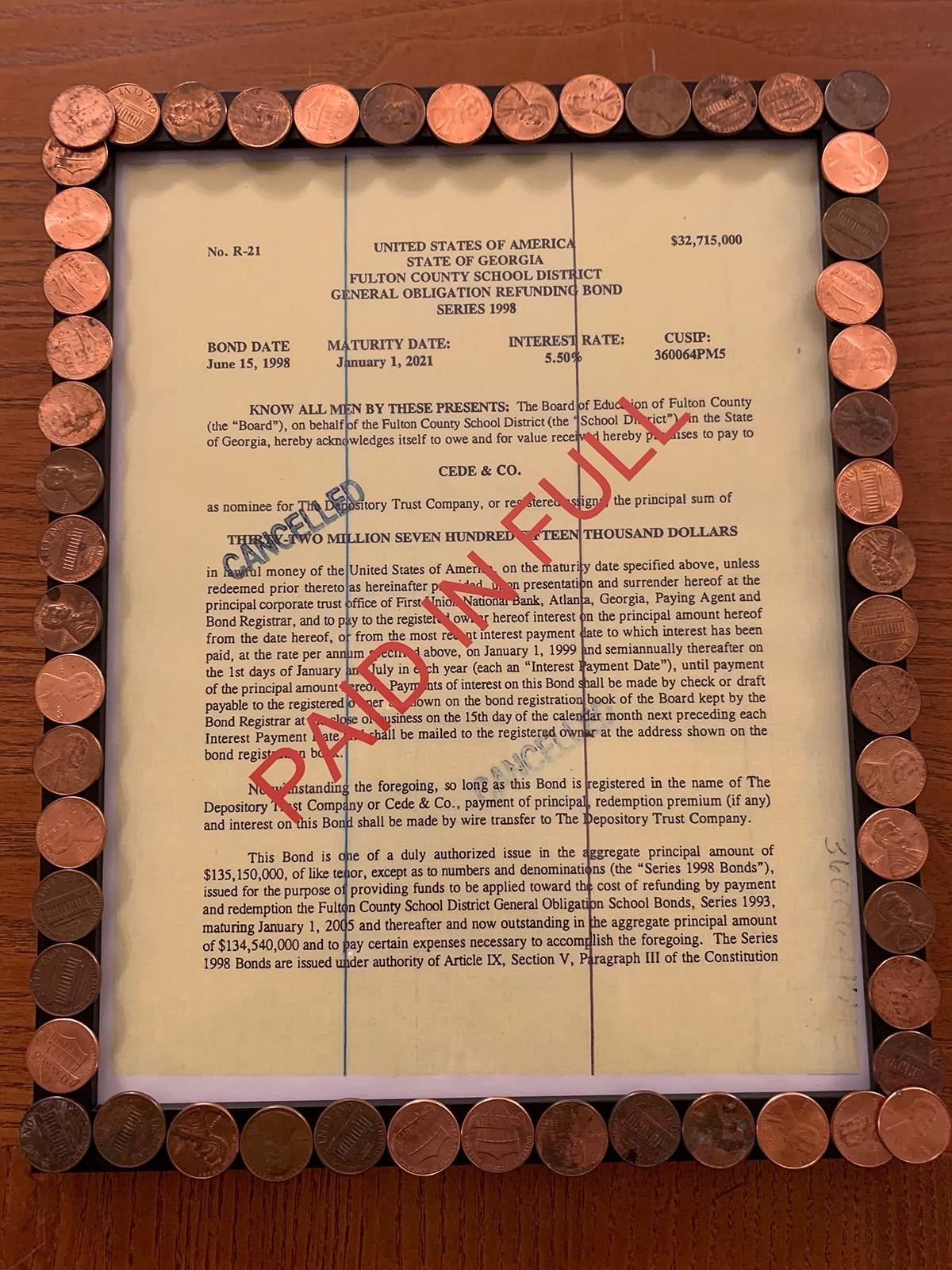 Each school board member received a penny-framed copy of the "paid in full" document in commemoration of the district paying off its final general obligation bond through SPLOST.

School Board Member Gail Dean displays her copy of the penny-framed "paid in full" document that was given in commemoration of the district paying off its final general obligation bond through SPLOST.

Vice President Kimberly Dove displays her copy of the penny-framed "paid in full" document that was given in commemoration of the district paying off its final general obligation bond through SPLOST.